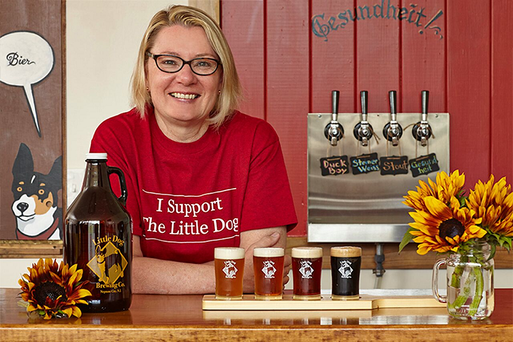 I can’t believe it’s been 6 years since Little Dog Brewing Co. opened! When the brewery opened its doors to the public in November 2014, we were only the second brewery in the area (our closest neighbor, Kane, had opened in 2011.) The time has gone quickly and a lot has happened:  bottles, cans, more equipment, more distribution, (lots) more competition.  On the other hand, in some ways I feel like we’re just getting started!

Loving what you do
When I began my accidental brewing career in the late 1990’s at Red Bank Brewing Co.  – one of NJ’s first breweries  - my goal or dream, whatever you want to call it, was never to open my own brewery.  I had found a vocation that I really enjoyed; I just wanted to brew good beer and talk about it with the people who were drinking it. This came as a surprise to people who knew me... the people who really knew me got it.
Even my father, who was always very supportive, was scratching his head trying to understand how a BA in English Lit from Mount Holyoke translated into a job as an assistant brewer. Until he realized I truly had a passion for the industry.
I worked hard at it, paid my dues, learned from some awesome, more experienced brewers, went out to California for a 3-month stint at the American Brewers Guild, came back home and was lucky enough to find work at two more of NJ’s original breweries/brewpubs:  The Ship Inn in Milford (the very first), and then at Basil T’s in Red Bank, where I spent a good part of my career.
But, after 12 years at Basil’s, the time had come to move on, and I did.  After a few years of writing, consulting and research, I wrote a business plan, found a derelict building, filed my state and federal paperwork, and had my limited brewer’s  license six months later.
So.  I’d like to invite all our friends, followers and supporters -- and new friends, too -- to visit this fall, try out our seasonal brews, and check out our glassware and T-shirts!
Cheers,
Gretchen

"Running With The Big Dogs Soon: The Little Dog Brewing Co."
​The PubScout